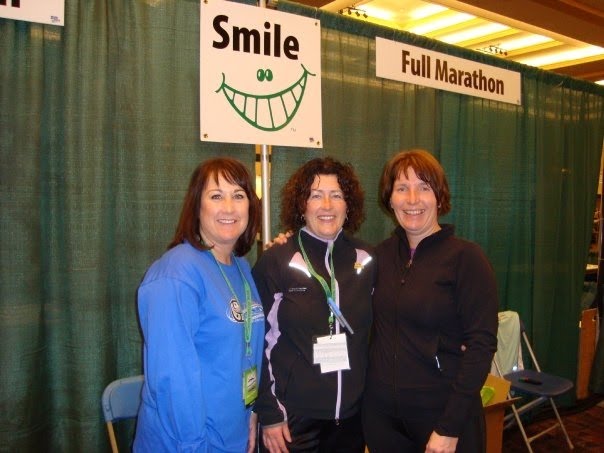 Jane, Me and Dee manning the shirt swap

Yesterday we took part in a unique Ottawa activity--skating on the Rideau Canal. If I have one thing to say it's that I'm so glad that Brent is a good skater. We had the kids with us plus a friend. I can skate but not great and we had two non-skaters with us, that being Nathan and Shelby's friend. Shelby would just go off by herself and Brent would have to skate way down the canal to find her. She was having a great time. This is a really cool experience to skate outside on a huge ice rink with hundreds of people. It really is amazing to see all the people.
Posted by Momo at Sunday, January 24, 2010 No comments:

Labels: This n That

Weather: -7 Celsius and sunny. Feels like -14C. When I say "feels like", this is always a direct quote from The Weather Network--not my own words. I'd probably always say it feels like minus 50.

We walked to the Trans Canada trail head and then began our 25 minute out and back run. It was a gorgeous morning with the sun shining brightly. Lots of people out too--familys walking, several snowmobilers, and a couple of cross country skiers but, strangely enough, no other runners. It was a bit cold to start but I really believe I'm finally starting to aclimatize as I was able to get rid of my gloves and hat on the way back.
Posted by Momo at Sunday, January 24, 2010 No comments:

Gear: Only 2 upper layers, one pair of tights, socks and gloves and Asics running shoes. BUT no winter trax, no balaclava, no hat, not even a headband.

Sidewalk conditions: Clear and wet with a couple of slippery sections

Workout: 40 minute out and back on the Trans Canada Trail with April

Woohoo! It felt almost like Spring tonight. It was great to finally shed some layers--amazing how even light extra layers make you feel so much heavier. This was the best run I've had all year. I know it's only mid-January but, hey, it was a good run.
Posted by Momo at Sunday, January 24, 2010 No comments: 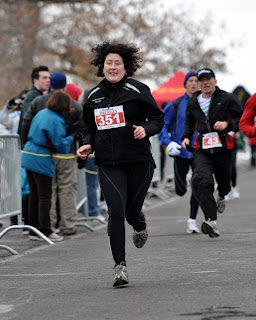 Weather: -3 Celsius. With windchill feels like -9 Celsius. Apparently this was the second warmest day for this race since it began in 1983.

I drove the 20 minutes out to Richmond to take part in my first race this year. Given my training, or really the lack of it, I felt it prudent to register for the 5K rather than the 10K race. I knew I'd end up walking if I did the 10K. I wasn't sure what it might be like out in Richmond so wore my trail shoes which actually turned out to be fine. There were lots of people--I'd say at least 300. It was held at a school and there was a festive mood, this being the first race of the season. It reminded me of the Harrier's Pioneer 8K race held the first weekend in January back in Victoria. I ran from my van to the gym and went inside to tie my shoes, adjust all my layers and put my race number on my jacket. It was weird not to see one single familiar face--this isn't like a big city race--it's a small community race where you usually know a lot of people. I did some stretching and just watched the goings on--everyone layering up. When the 10K participants went out I did too and decided to do a bit of a warm up. I'm not a "warm-up" kinda person as most of you know, but as it was too cold to stand around I kept moving. We were just about to start the race when I realized I didn't have my my running watch at home. THIS IS UNBELIEVABLE FOR ME. Most people who've run with me know that I rarely do this and that I'm actually quite AR about my watch and timing (like if we plan to run 45 minutes, I don't stop at 44, unless of course we're trying to beat last week's time). So, NO WATCH. Well, it was too late now. Then the race director stood us down so we didn't run into some straggling 10K walkers. Another 3 minutes bouncing up and down on the spot. And then we were off. I won't bore you with all the details but have to say that I really had to work this race as the course was very flat. I ran hard, hard for me that is, the whole way. I ended up removing my headband and gloves because I got so warm but when I tried to take my jacket off, I was stuck--the race number was holding it closed. Now I know why some people wore their race number on their thigh. I was neck and neck with a couple of other ladies who pulled away from me at less than a KM to go. I couldn't stick with them--I had nothing left. I finished in 29:07 which is a bloody miracle given the amount of running I've been doing. After the race they served soup along with a paper plate containing a juice box, a banana, a muffin, 3 cubes of cheese and a package of crackers for either the cheese or the soup. Soup was yummy. I ended up chatting to a couple of old fellers, one who placed 2nd in the 70-79 age group. These two guys, drove from Montreal for this race and they try to fit a race in every other weekend. Certainly something to stive for whether you're in your 40's or 70's.

I just figured out how to change the settings so that anyone can leave comments on my blog. Please leave your comments--I look forward to reading them. I see that lots of you read the blog and replied on Facebook, so I know you have stuff to say. And please share your stories. I know some of you have funny things happen to you. YOU KNOW WHO YOU ARE. So please share.
Posted by Momo at Saturday, January 16, 2010 3 comments:

As my friends know, my husband is known for his forgetfulness, "what he'd do" stories, coffee stained t-shirts and other crazy stuff. I'm going to share these with you as and when they happen. So here is the first of, likely, many Brentisms.

The other night I baked brownies for the kids' lunches (though Brent and I ate most of them). So, there I am cleaning up the stove and I move a pan which I notice was hot to the touch. I lifted it up and realized the middle gas burner was on. I turned to Brent (sitting on the couch playing Nathan's DS) and asked him what he had cooked for supper. He replied that he hadn't "cooked" anything but had heated up soup in the microwave. Well, I said, the burner is on. He looks up at me, tearing himself away from some racing game, and sheepishly says "Oh, that must have been from last night". What the???? Sure enough the gas burner had been on for about 28hours. Does this remind you of anything? Like when he left the van running overnight?
Posted by Momo at Saturday, January 16, 2010 3 comments: 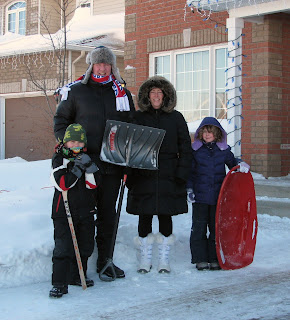 Here's our version of the famous American Gothic--the typical family suffering through a Canadian winter.
Posted by Momo at Tuesday, January 12, 2010 2 comments:

Labels: This n That

Workout: 38 minute out and back on the Trans Canada Trail with April

Great to get out and enjoy a sunny morning. Although it was chilly it was refreshing and actually felt warmer than it was--must have beeen the sunshine. Met lots of people on the T-C Trail who were out walking, running and cross country skiing. Must have been too early for the snowmobilers. Out on the sidewalk it is a sight to behold--it looks and feels like you're running through a tunnel with all the snow piled high on people's yards and then even higher on the boulevard. This is why there's no parking on the roads here in the winter.
Posted by Momo at Tuesday, January 12, 2010 No comments:

Workout: 42 minute out and back

It was a cold one tonight. And slow. Slow because of the snow and because of the temperature. I needed all my layers tonight. On the way back I had to jump up 2feet onto a snowbank to avoid being run over by two snowmobilers. I think they were as surprised to see me as I was to see them. I was coming around a corner and the two headlights looked like a car. Didn't hear them either because of traffic. Just another thing to watch out for here in Ottawa.
Posted by Momo at Tuesday, January 12, 2010 No comments:

Sidewalk conditions: packed snow over ice with a skiff of fresh powder

Workout: 37 minute out and back

It was a cold one this afternoon. This snow is hard work. If you've ever run along a beach, not near the water but in the soft sand near the high tide line, then you'll get an idea of what it's like to run in snow that's not hard packed. You have to take small steps and it's a lot of work. With the windchill it was great to have the new balaclava. You want to have no bare spots.
Posted by Momo at Tuesday, January 12, 2010 No comments:

Workout: 35 minute out and back

A great afternoon for a post-Christmas turkey dinner run. It was so warm today that I had to navigate between snow banks and puddles.
Posted by Momo at Tuesday, January 12, 2010 No comments: